Final Bid is available in print through DriveThru RPG.

Final Bid is a cooperative adventure game where you play as the actors in a film. A fictional film. Not fictional as in, "the events portrayed aren't real." I mean this film doesn't exist yet. You're about to make it.

In Final Bid, players must auction off parts of their character in order to take control of the story. The one who is willing to put the most on the line will win the right to decide what happens next in the film.

Gamble it all to make tomorrow yours.

It's time to place your Final Bid.

Final Bid is an auction-based tabletop roleplaying game for 3-6 players. Each 2-4 hour session is a standalone story, perfect for one shots. There are six different film settings for you to play in, each with 8 of their own unique Roles to play.

Law's Out 2, the sequel to 2014's title Law's Out. This setting is a gritty western film where someone always bites it during the dramatic final showdown. Roles include the wealthy Baron, the wily Outlaw, and the Devil himself.

Xenohunter is a sci fi horror film, featuring a slow build up to a tense, frightening second half of the film. Roles include the terrifying Beast, the courageous Captain, and the unpredictable Convict.

The Havoc Engine takes place in a dystopian future where everyone's a little bit beyond human. Roles include the merciless Machine, the rebellious Firecracker, and the untouchable Doll.

Worth Their Salt is a noir mystery setting, full of high contrast, moody brooding, and sudden backstabbing. Roles include the excitable Kid, the relentless Newsie, and of course, the brooding Detective.

Dramatis Personally is a spy thriller film with action and suspense around every corner. Roles include the overconfident Ace, the unbending Law, and the villainous Mastermind.

Glenbrook is a teen drama, written by Grant. Dramatic, chaotic, and earnest, Glenbrook is a small town of brilliant highs and devastating lows. Roles include the spoiled Princess, the overprotective Parent, and the inspiring Teen Next Door.

The content in this book is under the Creative Commons CC-BY-SA License: https://creativecommons.org/licenses/by-sa/4.0/

All artwork belongs to their original artists and is used with permission.

In order to download this game you must purchase it at or above the minimum price of $11.95 USD. You will get access to the following files: 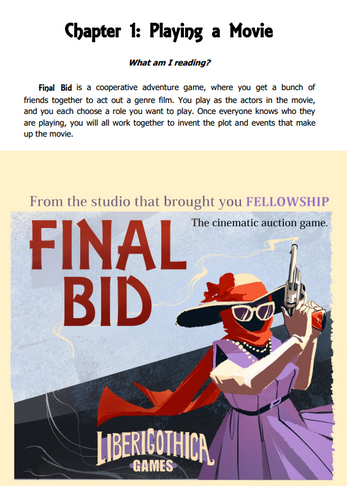 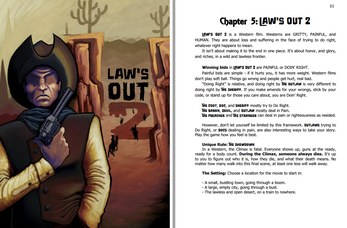 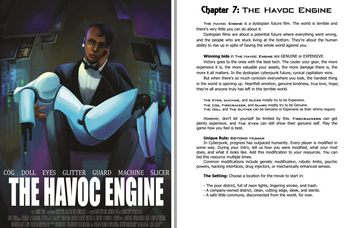 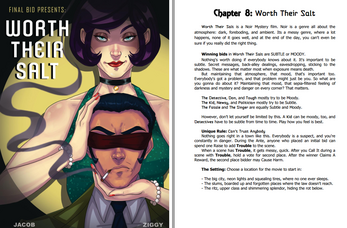 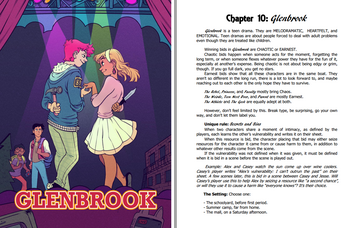